Sintra is a major tourist destination in Portugal, famed for its picturesqueness and for its numerous historic palaces and castles. In the 19th century Sintra became the first centre of European Romantic architecture. Around 1840, king Ferdinand II turned a ruined monastery into a castle in which Gothic, Egyptian, Moorish and Renaissance elements were displayed. Among newer sights there is also the Moorish Castle, might be of Visigothic origin. It was certainly used in the 9th century, during the Moorish occupation. 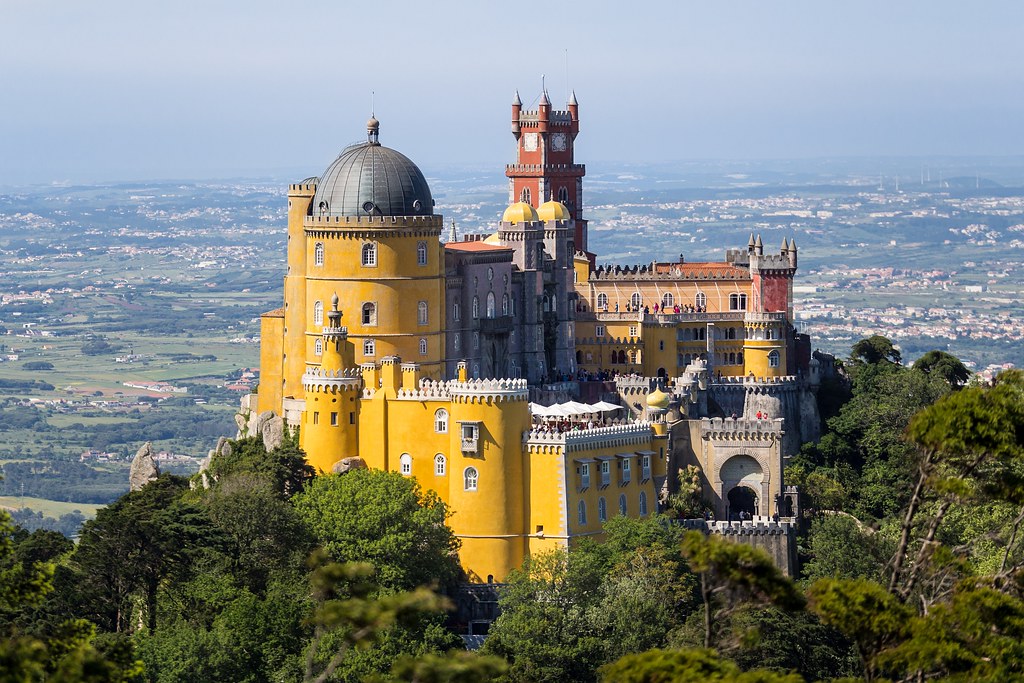 Photo from Flickr, copyright tolliv
The Pena Palace stands on the top of a hill in the Sintra Mountains above the town of Sintra, and on a clear day it can be easily seen from Lisbon and much of its metropolitan area. It is a national monument and constitutes one of the major expressions of 19th-century Romanticism in the world. The palace is a UNESCO World Heritage Site and one of the Seven Wonders of Portugal. It is also used for state occasions by the President of the Portuguese Republic and other government officials. The castle"s history started in the Middle Ages when a chapel dedicated to Our Lady of Pena was built ... 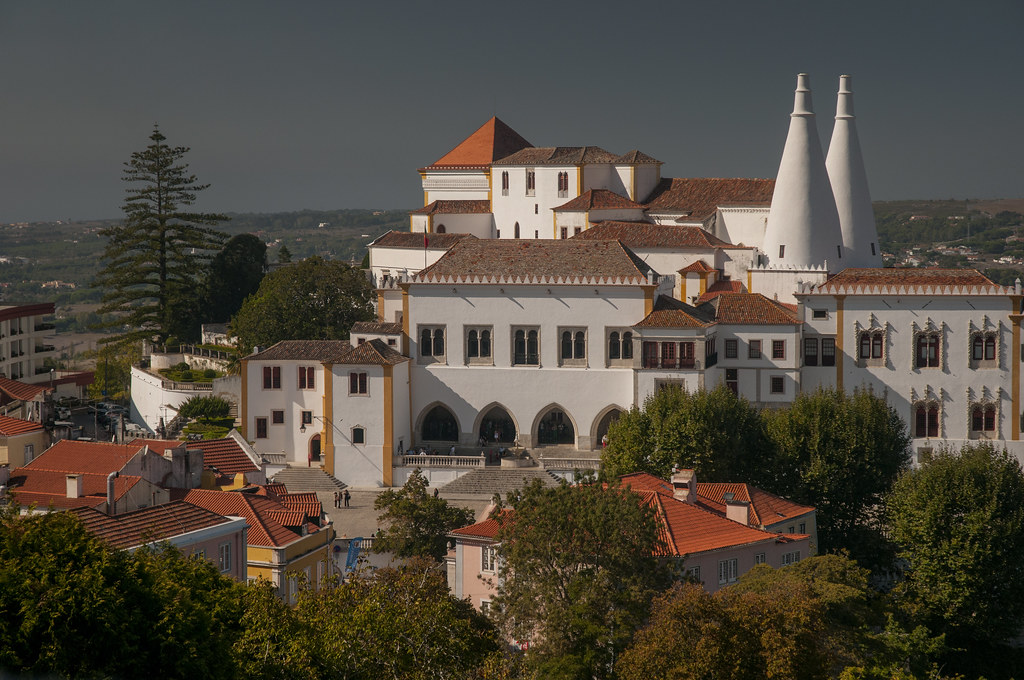 Photo from Flickr, copyright Darrell Godliman
The Palace of Sintra is the best-preserved medieval royal residence in Portugal, being inhabited more or less continuously from at least the early 15th century to the late 19th century. It is a significant tourist attraction, and is part of the cultural landscape of Sintra, a designated UNESCO World Heritage Site. The history of the castle begins in the Moorish Al-Andalus era, after the Umayyad conquest of Hispania in the 8th century, when Sintra had two castles. One was located atop of a hill overlooking Sintra (known as the Castelo dos Mouros, now a romantic ruin). The second castle was lo ... 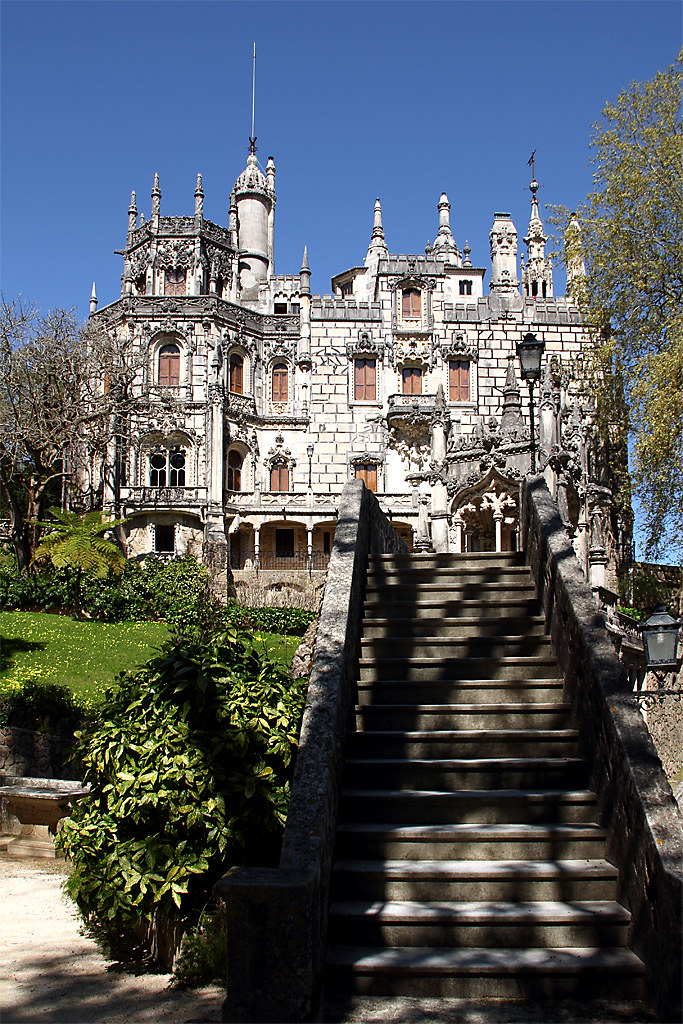 Photo from Flickr, copyright fuerst
Quinta da Regaleira is an estate located near the historic center of Sintra. It is classified as a World Heritage Site by UNESCO within the 'Cultural Landscape of Sintra'. Along with the other palaces in the area such as the Quinta do Relógio, Pena, Monserrate and Seteais palaces, it is considered one of the principal tourist attractions of Sintra. The property consists of a romantic palace and chapel, and a luxurious park that features lakes, grottoes, wells, benches, fountains, and a vast array of exquisite constructions. The palace is also known as 'The Palace of Monte ...

4. Castle of the Moors 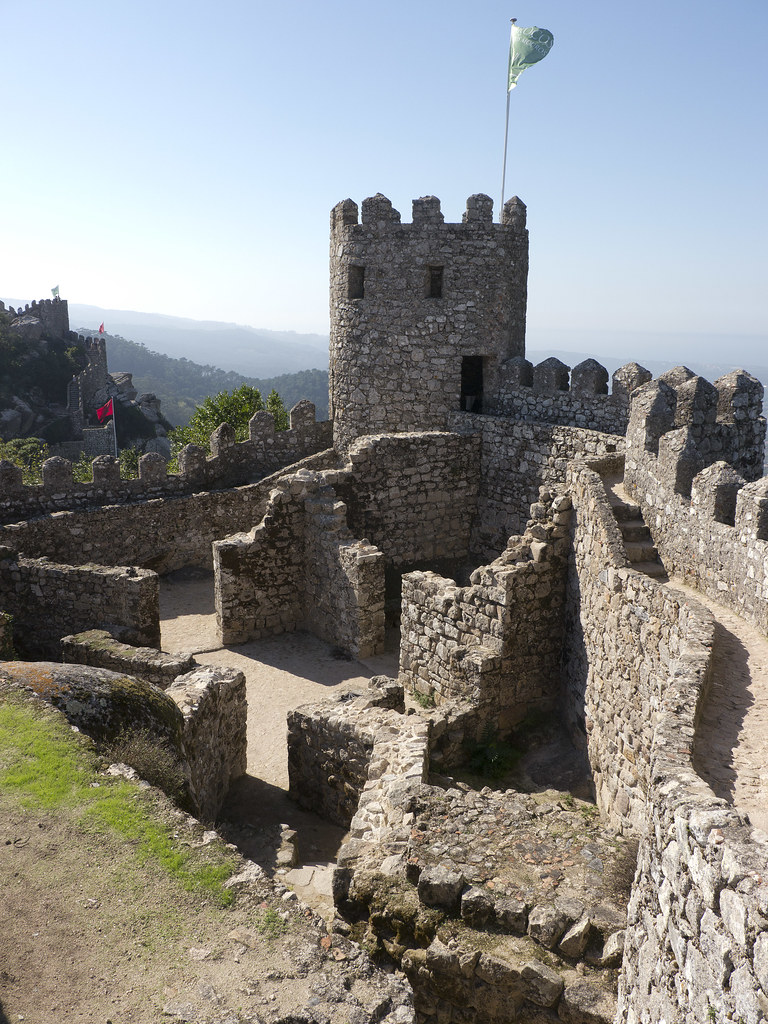 Photo from Flickr, copyright helmut the horrible
The Castle of the Moors is a hilltop medieval castle built by the Moors in the 8th and 9th centuries. It was an important strategic point during the Reconquista, and was taken by Christian forces after the fall of Lisbon in 1147. It is classified as a National Monument, part of the Sintra Cultural Landscape, a UNESCO World Heritage Site. During the second half of the 12th century, the chapel constructed within the walls of the castle became the parish seat. This was followed by the remodelling and construction under the initiative of King Sancho I of Portugal. In 1375 King Ferdinand I of Port ... 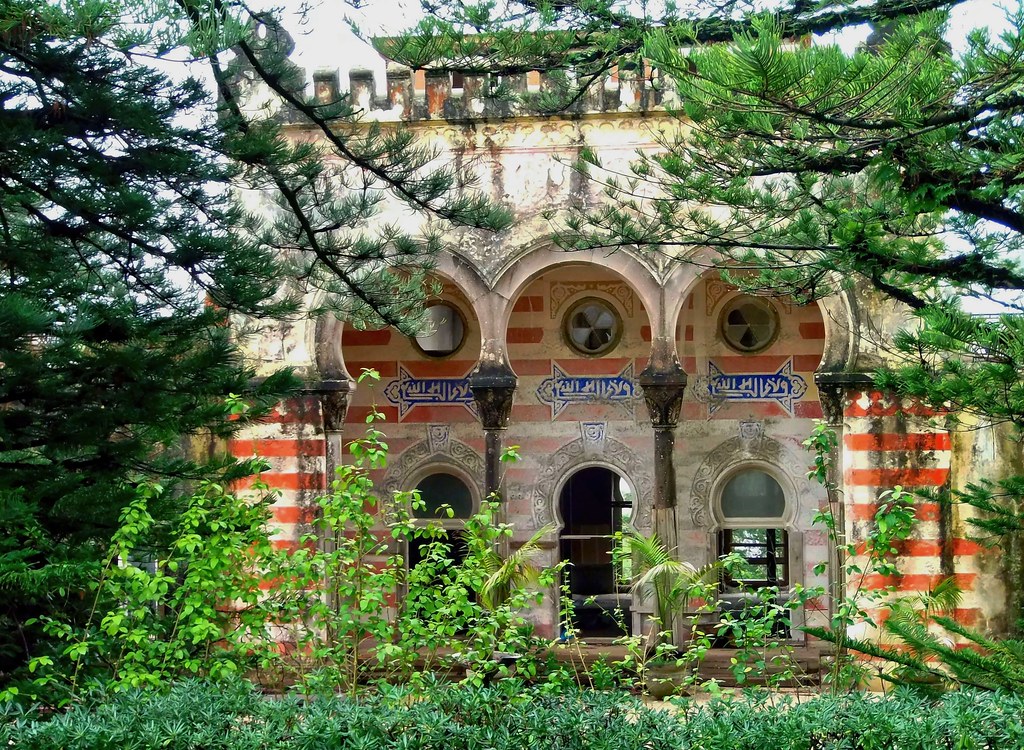 Photo from Flickr, copyright Daniel Arrhakis
Quinta do Relógio is an estate located near the historic center of Sintra. It is classified as a World Heritage Site by UNESCO within the 'Cultural Landscape of Sintra'. Along with the nearby palaces such as Seteais Palace and the Quinta da Regaleira next to it, it is considered one of the tourist attractions of Sintra. The property consists of a romantic palace and chapel, and a park. The estate, or quinta in Portuguese, was acquired by José de Sousa Coutinho, 15th Count of Redondo during the second half of the 18th century. During the reign of Dom Pedro V of Portugal ... 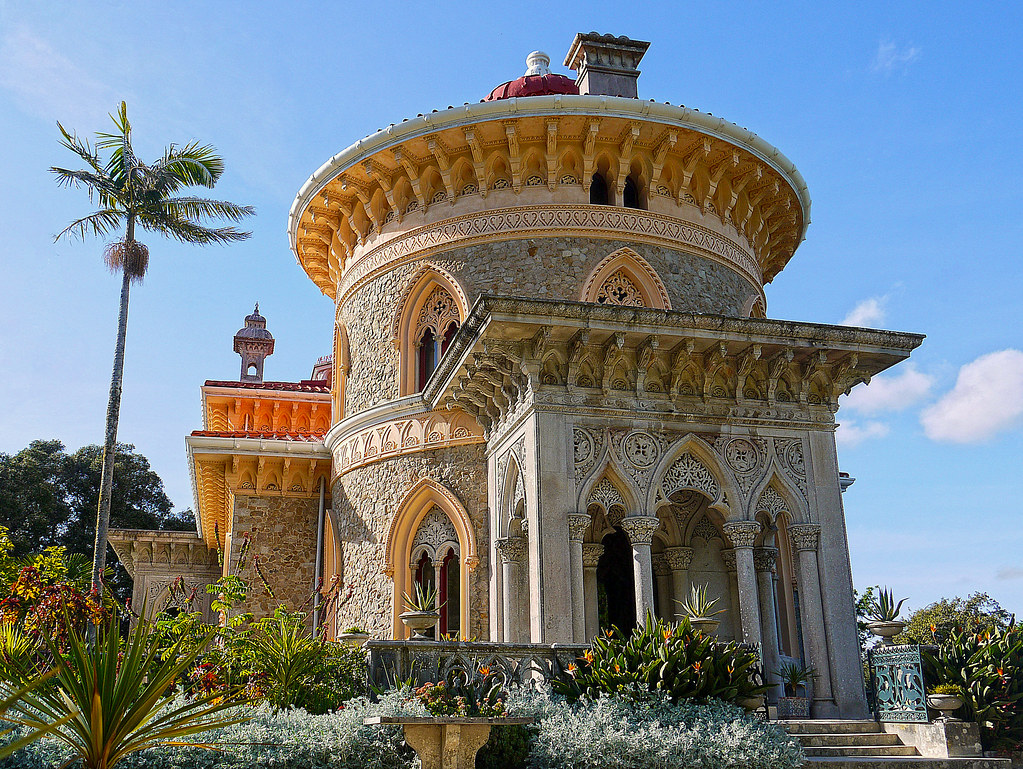 Photo from Flickr, copyright kkmarais
The Monserrate Palace is an exotic palatial villa located near Sintra, the traditional summer resort of the Portuguese court. It was restored in 1858 for Sir Francis Cook, an English baronet created Viscount of Monserrate by King Luís I. The design was influenced by Romanticism and Mudéjar Moorish Revival architecture with Neo-Gothic elements. The eclecticism is a fine example of the Sintra Romanticism, along with other nearby palácios, such as the Pena Palace and the Quinta do Relógio. The Islamic architectural influence is in reference to when the region was a part of the wider Muslim G ... 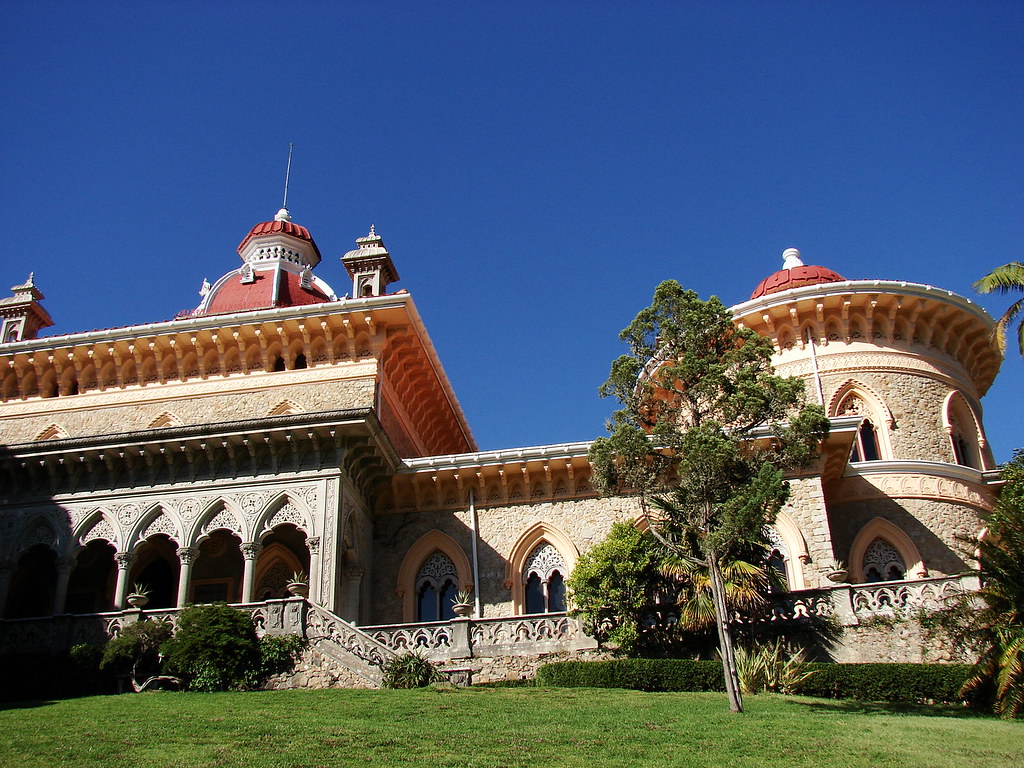 Photo from Flickr, copyright RiCArdO JorGe FidALGo
The Seteais Palace is now a luxury hotel, restaurant and a tourist attraction included in the Cultural Landscape of Sintra, listed as World Heritage Site by UNESCO. The Seteais Palace was built between 1783 and 1787 for the Dutch consul Daniel Gildemeester, on lands granted by the Marquis of Pombal. The consul chose to build his house on the border of an elevation, from which the vast landscape around the Sintra hills could be admired. The palace was surrounded with a large garden with fruit trees. In 1797, some years after the consul's death, his widow sold the palace to Diogo José Vito de ...

The Petersberg Citadel is one of the largest extant early-modern citadels in Europe and covers the whole north-western part of the Erfurt city centre. It was built after 1665 on Petersberg hill and was in military use until 1963. It dates from a time when Erfurt was ruled by the Electors of Mainz and is a unique example of the European style of fortress construction. Beneath the citadel is an underground maze of passageways that can be visited on guided tours organised by Erfurt Tourist Office.

The citadel was originally built on the site of a medieval Benedictine Monastery and the earliest parts of the complex date from the 12th century. Erfurt has also been ruled by Sweden, Prussia, Napoleon, the German Empire, the Nazis, and post-World War II Soviet occupying forces, and it was part of the German Democratic Republic (East Germany). All of these regimes used Petersberg Citadel and had an influence on its development. The baroque fortress was in military use until 1963. Since German reunification in 1990, the citadel has undergone significant restoration and it is now open to the public as a historic site.