Among the stunning lakeside and mountain views Lake Garda in northern Italy is known for its history. There are many (but not too many) interesting historic sites to visit around the lake from the prehistoric and Roman times until early modern age. 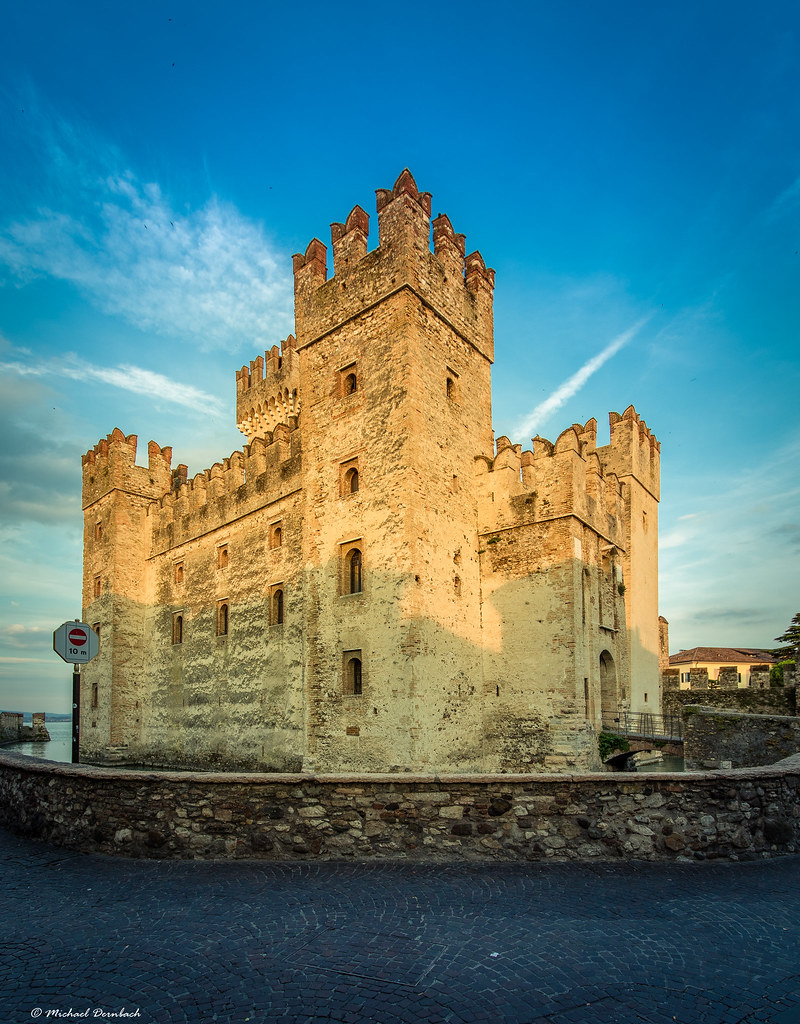 Photo from Flickr, copyright eiljot
Sirmione castle was built near the end of the 12th century as part of a defensive network surrounding Verona. The castle was maintained and extended first as part of the Veronese protection against their rivals in Milan and later under the control of the Venetian inland empire. The massive fortress is totally surrounded by water and has an inner porch which houses a Roman and Medieval lapidary. From the drawbridge, a staircase leads to the walkways above the walls, providing a marvellous view of the harbour that once sheltered the Scaliger fleet. The doors were fitted with a variety of locking ... 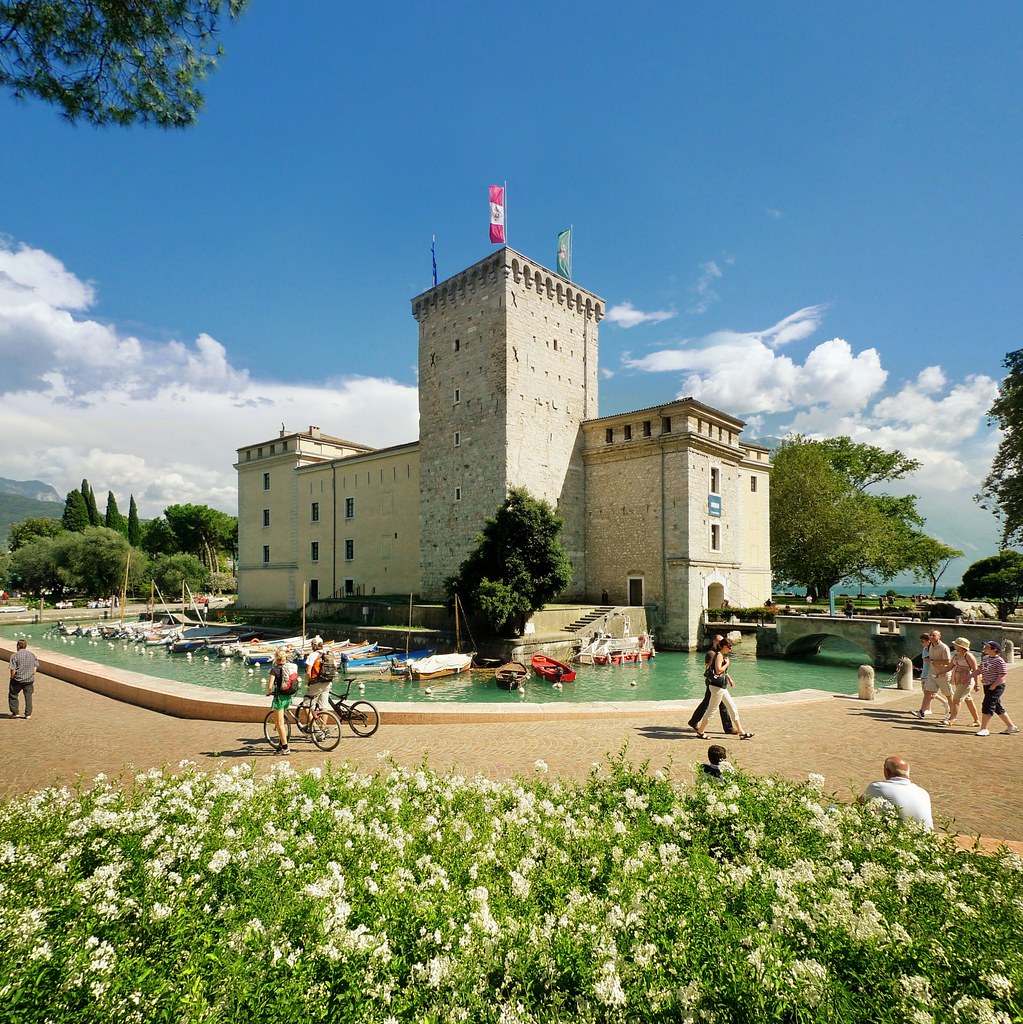 Photo from Flickr, copyright B℮n
Rocca, a medieval castle with quadrangular bastions bounded by a canal with drawbridge, was built in 1124. It was the fortress of the noble family Scaligeri, who became the Lords of Verona. It was rebuilt several times and it was used by the Austrians as barracks in the 18th century. It is frequently the seat of cultural activities, especially during the summer months. It hosts the Civic Museum and of the Picture Gallery. 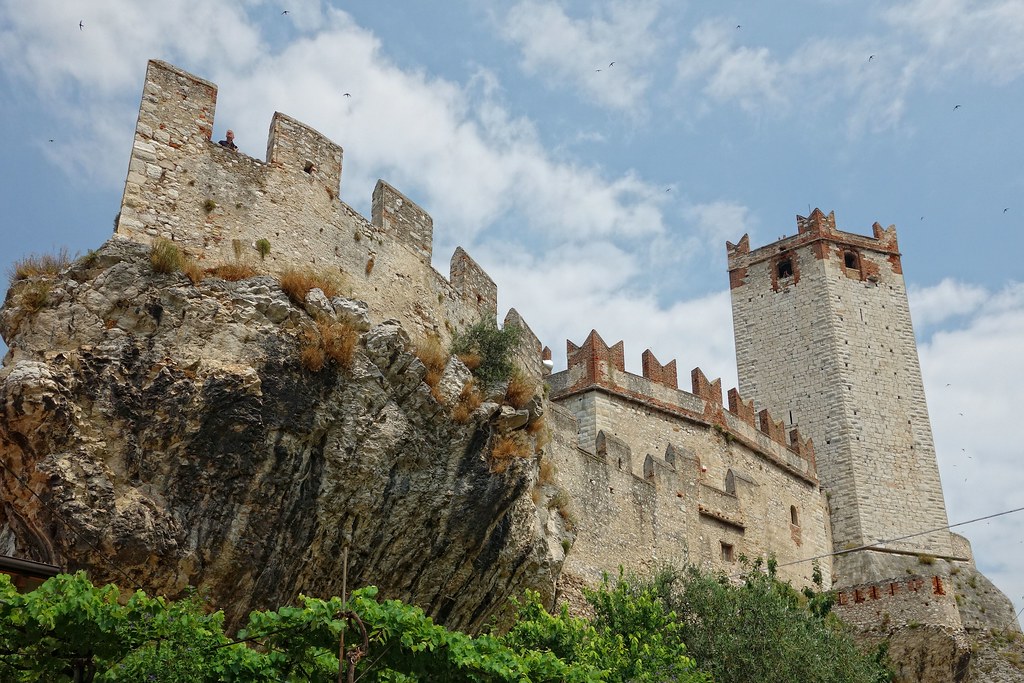 Photo from Flickr, copyright tsbl2000
Malcesine's most prominent landmark is the Castello Scaligero, which has 13th-century fortifications and an older medieval tower in white natural stone. Like the castle of Sirmione at the southern end of the lake, it is named for the della Scala family of Verona who ruled the region in the 13th and 14th centuries, and has the characteristic swallow-tail Ghibelline merlon crenallations. Remnants of an Etruscan tomb have been found within the castle walls. Most of the structures visible today date to the period of the della Scala. The bell of the castle was cast in 1442 and it is still in servic ... 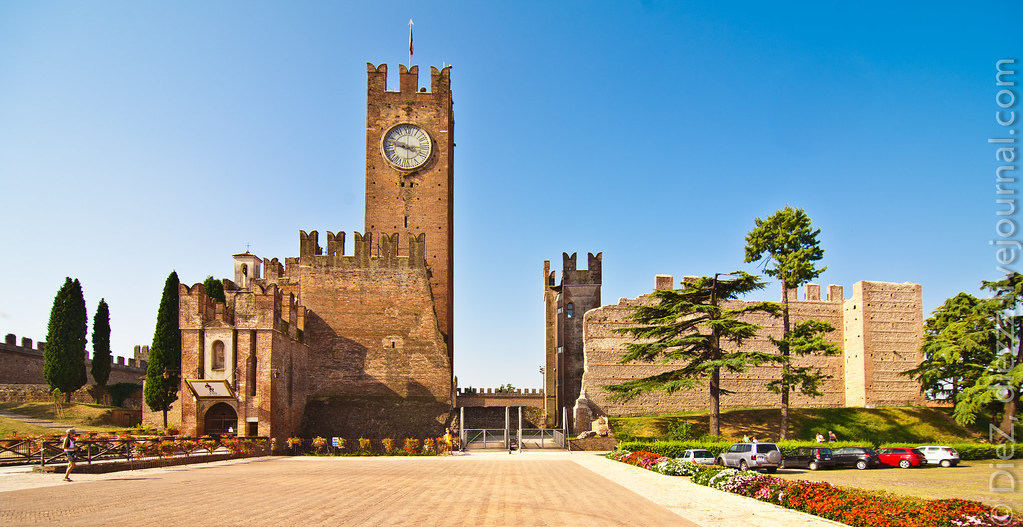 Photo from Flickr, copyright diez_ua
The Castle of Villafranca di Verona was built starting in 1199, after the Battle of Ponte dei Molini (Mantua), and was completed in 1202. The purpose was to defend the population of Villafranca in casa of sudden attacks from Mantua. Serraglio, a defensive wall unique in Europe, was built in 1345. It is about 13 miles long. It started from Borghetto and linked five castles: Borghetto, Valeggio, Gherla, Villafranca and Nogarole Rocca. Nowadays, of the Serraglio remains only some traces that can be seen along the right bank of the river Tione. Inside the walls, there are seven small towers call ... 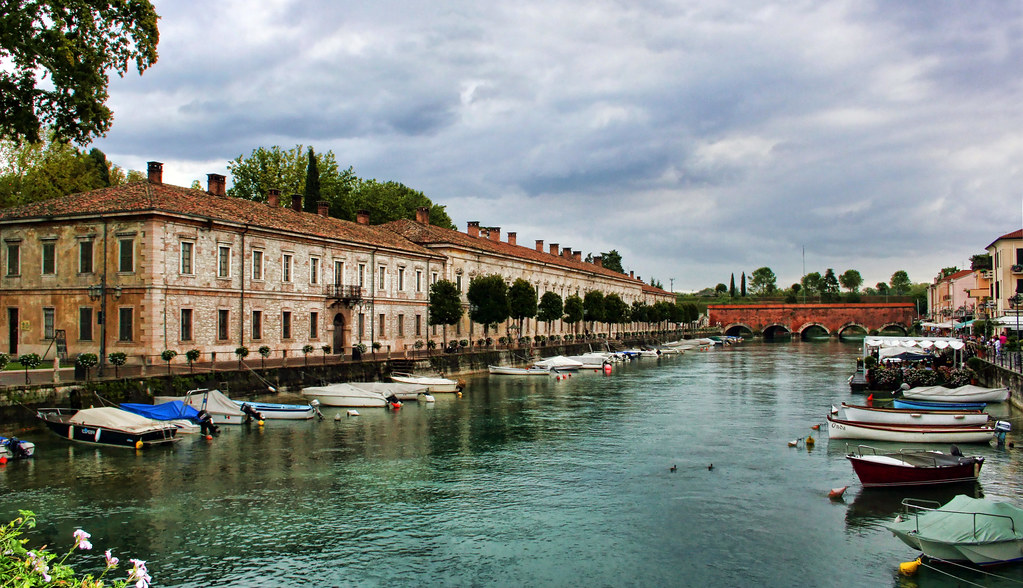 Photo from Flickr, copyright sminky_pinky100 (In and Out)
Peschiera del Garda was once the site of an ancient lake-dwelling settlement. The fortress played a prominent part in most military campaigns conducted in northern Italy after 1400. In the middle of the 16th century the fortress and town passed into the hands of the Venetians, who ordered reconstruction of the fortress according to projects by Guidobaldo da Urbino and Sanmicheli. Napoleon added two new fortresses there. At the beginning of the 19th century the Austrians redesigned and expanded the fort. With Mantua, Verona, and Legnano, it became one of the strongholds of the Quadruple Allianc ...

Photo from Flickr, copyright Luca Santoro Photography ©
The Grotte di Catullo was a large Roman villa on the end of the Sirmione peninsula. The villa, built around 150 AD, is the most important example of a high-class residence in the whole of northern Italy. Just after the entrance to the archaeological park one find the Museum, where objects brought to light during the excavation of the villa, and in archaeological work conducted in Sirmione and other localities of lake Garda, are displayed. 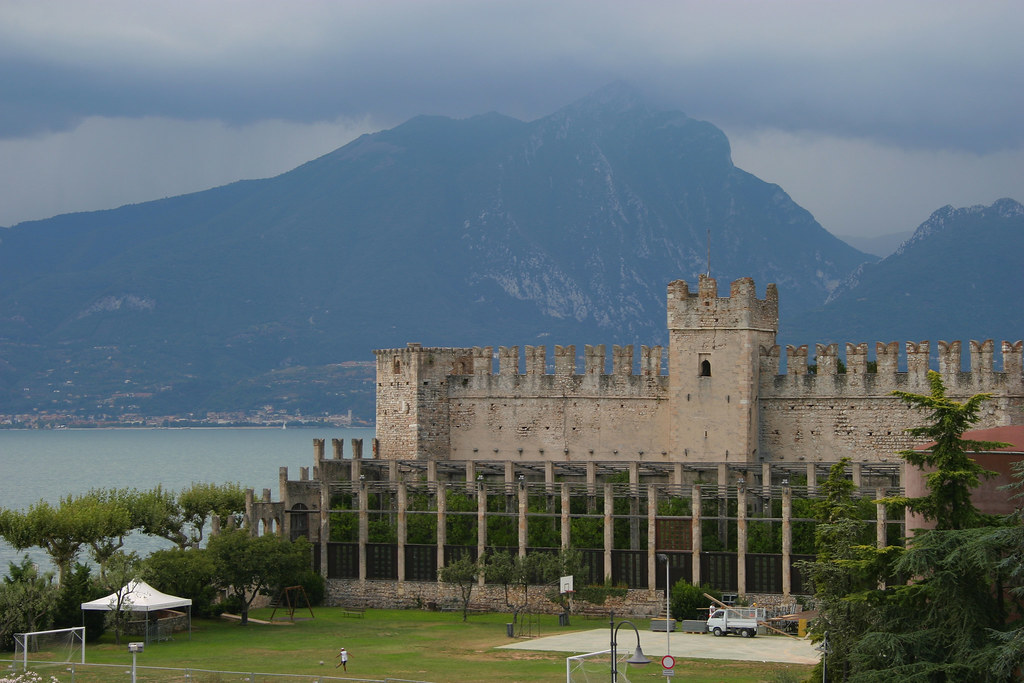 Photo from Flickr, copyright Andy Burnton
The present castle at Torri del Benaco (Castello Scaligero) was built by Antonio della Scala in 1383 to the ruins of a older castle dating back to the Xth century. The West Tower of older castle still remains. In 1760 the second curtain wall was torn down to make way for the Lemon Grove. The decline of the castle ended in 1980 when the Commune of Torri started complete restoration under the architect Rudi Arrigo. 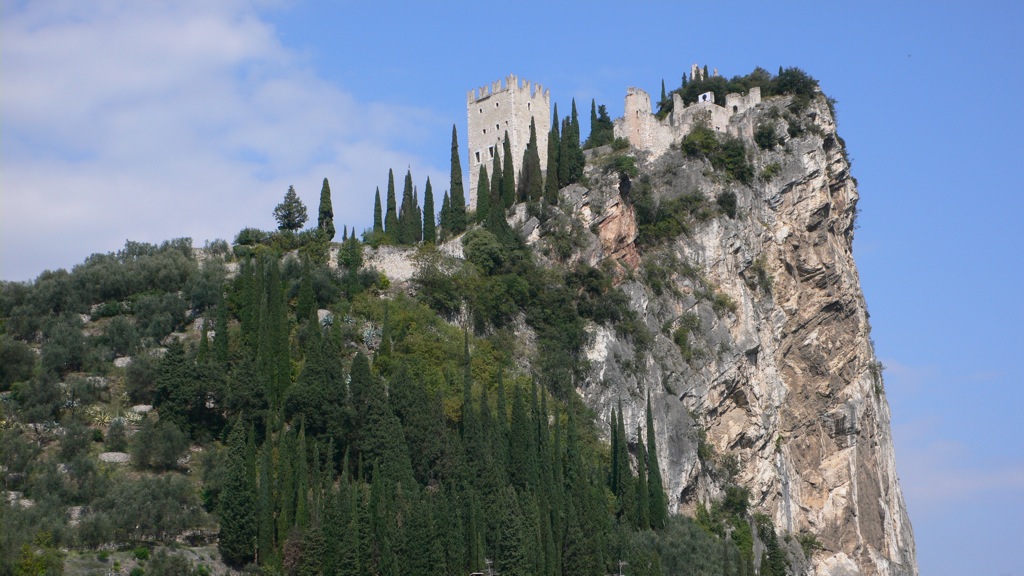 Photo from Flickr, copyright kumo
Arco Castle ruins are located on a prominent spur high above Arco and the Sarca Valley. The exact date of its foundation is unknown but it existed at least after the year 1000 AD. The area around Arco was inhabited already before the Middle Ages, the castle was said to have been built by the citizens and only later becoming the property of the local nobles. The counts of Arco, probably of Italian origin, were first mentioned in 1124 deed; they temporarily served as liensmen of the Trent prince-bishops. Though they were raised to comital (Grafen) status by the Hohenstaufen emperor Frederick II ... 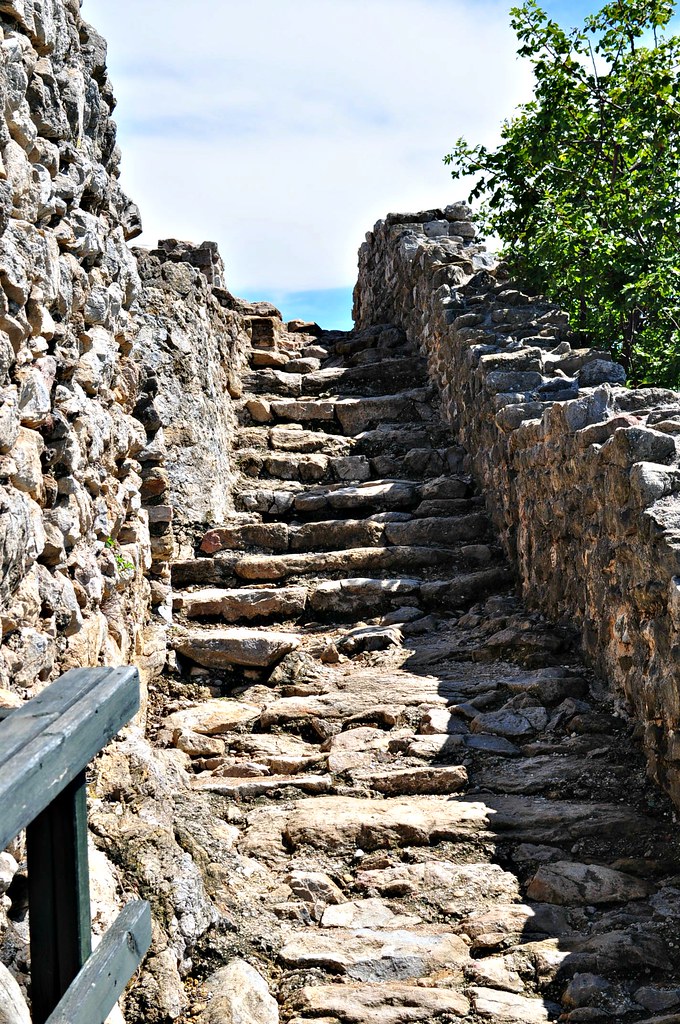 Photo from Flickr, copyright SandraBubbles
There are remains of a Mesolithic village the Manerba archaeological park area, while under natural terrace located in the foothills of the Rocca (castle) are traces of a Neolithic settlement from between 4,500 and 4,000 BC, and an important necropolis dating from the Copper Age. Photo from Flickr, copyright Daniele Sala Photography©
The Ossario di San Martino is a small chapel that houses over 1,200 skulls and over 2,000 bones that belonged to fallen soldiers who fought in a key 19th-century European conflict. In 1859, during the Second Italian War of Independence, there was a great battle here, more commonly called the Battle of Solferino. It was fought out between Austrian and the Piedmontese army. Solferino was the largest battle since that at Leipzig in 1813. As a result of their defeat, the Austrians lost their grip on the region. Originally built as a chapel, the Ossario di San Martino was later converted in ...

Redipuglia is the largest Italian Military Sacrarium. It rises up on the western front of the Monte Sei Busi, which, in the First World War was bitterly fought after because, although it was not very high, from its summit it allowed an ample range of access from the West to the first steps of the Karstic table area.

The monumental staircase on which the remains of one hundred thousand fallen soldiers are lined up and which has at its base the monolith of the Duke of Aosta, who was the commanding officer of the third Brigade, and gives an image of a military grouping in the field of a Great Unity with its Commanding Officer at the front. The mortal remains of 100,187 fallen soldiers lie here, 39,857 of them identified and 60,330 unknown.