Stone tools indicate that early humans were present in France at least 1.57 million years ago. The Grotte du Vallonnet near Menton contained simple stone tools dating to 1 million to 1.05 million years BC. Cave sites were exploited for habitation, but the hunter-gatherers of the Palaeolithic era also possibly built shelters such as those identified in connection with Acheulean tools at Grotte du Lazaret and Terra Amata near Nice in France. Excavations at Terra Amata found traces of the earliest known domestication of fire in Europe, from 400,000 BC.

The Neanderthals, the earliest human species to occupy Europe, are thought to have arrived there around 300,000 BC, but seem to have died out by about by 30,000 BC, presumably unable to compete with modern humans during a period of cold weather. The earliest modern humans – Cro-Magnons – were present in Europe by 43,000 years ago during a long interglacial period of particularly mild climate, when Europe was relatively warm, and food was plentiful. When they arrived in Europe, they brought with them sculpture, engraving, painting, body ornamentation, music and the painstaking decoration of utilitarian objects. Some of the oldest works of art in the world, such as the cave paintings at Lascaux in southern France, are datable to shortly after this migration. 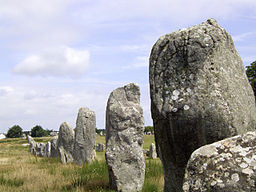 The Neolithic period lasted in northern Europe for approximately 3,000 years (c. 4500 BC–1700 BC). It is characterised by the so-called Neolithic Revolution, a transitional period that included the adoption of agriculture, the development of tools and pottery, and the growth of larger, more complex settlements. Many European Neolithic groups share basic characteristics, such as living in small-scale family-based communities, subsisting on domestic plants and animals supplemented with the collection of wild plant foods and with hunting, and producing hand-made pottery. Archeological sites in France include artifacts from the Linear Pottery culture (c. 5500-4500 BC), the Rössen culture (c. 4500—4000 BC), and the Chasséen culture (4,500 - 3,500 BC), the name given to the late Neolithic pre-Beaker culture that spread throughout the plains and plateaux of France, including the Seine basin and the upper Loire valleys.

It is most likely from the Neolithic that date the megalithic (large stone) monuments, such as the dolmens, menhirs, stone circles and chamber tombs, found throughout France, the largest selection of which are in the Brittany and Auvergne regions. The most famous of these are the Carnac stones (c. 3300 BC, but may date to as old as 4500 BC) and the stones at Saint-Sulpice-de-Faleyrens.

The early Bronze Age archeological cultures in France include the transitional Beaker culture (c. 2800–1900 BC), the Tumulus culture (c. 1600-1200 BC) and Urnfield culture (c. 1300-800 BC). Bronze Age sites in Brittany are believed to have grown out of Beaker roots, with some Wessex culture and Unetice culture influence. Some scholars think that the Urnfield culture represents an origin for the Celts as a distinct cultural branch of the Indo-European family. This culture was preeminent in central Europe during the late Bronze Age; the Urnfield period saw a dramatic increase in population in the region, probably due to innovations in technology and agricultural practices.

Carnac stones are an exceptionally dense collection of megalithic sites around the village of Carnac, consisting of alignments, dolmens, tumuli and single menhirs. More than 3,000 prehistoric standing stones were hewn from local rock and erected by the pre-Celtic people of Brittany, and are the largest such collection in the world. Most of the stones are within the Breton village of Carnac, but some to the east are within ...
Founded: 4500 - 3300 BC | Location: Carnac, France

Filitosa is a megalithic site in southern Corsica, France. The period of occupation spans from the end of the Neolithic era and the beginning of the Bronze Age, until around the Roman times in Corsica. The site was discovered in 1946 by the owner of the land, Charles-Antoine Cesari. Finds of arrow heads and pottery date earliest inhabitation to 3300 BC. Around 1500 BC, 2-3 metre menhirs were erected. They hav ...
Founded: 3300 BCE | Location: Sollacaro, France

The Locmariaquer megaliths are a complex of Neolithic constructions. They comprise the elaborate Er-Grah tumulus passage grave, a dolmen known as the 'Table des Marchand' (Merchant"s Table) and 'The Broken Menhir of Er Grah', the largest known single block of stone to have been transported and erected by Neolithic man. The Broken Menhir of Er Grah was erected around 4700 BC, at the same time as a ...
Founded: 4700 BC | Location: Locmariaquer, France

The Cairn of Barnenez is the largest Megalithic mausoleum in Europe. It dates from the early Neolithic Age is considered one of the earliest megalithic monuments in Europe. It is also remarkable for the presence of megalithic art. Radiocarbon dates indicate that the first phase of the monument was erected between 4850 and 4250 BC, and the second phase between 4450 and 4000 BC. Pottery found in and around the monument indi ...
Founded: 4850 - 4000 BC | Location: Plouezoc'h, France

The Tumulus of St. Michel is a megalithic grave mound, located east of Carnac. The 125m long, 60m wide and 10m high mound is the largest grave mound in continental Europe. The age of the monument, and the chronology of the construction of the central burial-chambers and outlying dolmen have been the subject of much speculation. Ancient samples were radiocarbon dated, but the results were too disparate to be significant. R ...
Founded: 4500 BC | Location: Carnac, France

The menhir, or upright standing stone, of Champ Dolent is the largest standing stone in Brittany. It is located in a field outside the town of Dol-de-Bretagne, and is nearly 9 meters high. The stone was taken from a site 4 kilometers away. It has a smaller polished stone at its base. It is not precisely dated, but recent scholarship suggests that Brittany's menhirs were erected c. 5000-4000 BC. According to legend, the ...
Founded: 5000-4000 BCE | Location: Dol-de-Bretagne, France

Dolmen de la Madeleine is an isolated dolmen located in a private field on the outskirts of the town of Gennes. It was probably built between 5 000-2 000 BC. There are a number of these sites in the area - but this one is said to be the largest. Like many of the larger dolmens, it has subsequently been re-used, in this case to house a bread oven. Although the bread oven is no longer in use as the dolmen is now a classifie ...
Founded: 5000-2000 BC | Location: Gennes, France

Dating from c. 4600 BC at the earliest, Le Petit Mont is one of the most significant Cairns in Brittany, but unfortunately one of the most brutaly vandalized. The cairn measures 60 meters in length, 46 meters in width, and between 6 and 7 meters in height. It is built over several dolmens with antechambers. The dolmen in the southwest has engravings that include axes in circles, fitted axes, and undulating signs. The Roma ...
Founded: 4600 BC | Location: Arzon, France

The Gavrinis island is famous because of its important passage grave, a megalithic monument from the Neolithic period, belonging to the same broad context as the Breton megaliths of Carnac and Locmariaquer. At the time of its construction, c. 3500 BC, the island was still connected with the mainland. The rich internal decorations make Gavrinis one of the major treasuries of European megalithic art. The tomb is also remark ...
Founded: 3500 BC | Location: Larmor-Baden, France

The Cave of Niaux contains many prehistoric paintings of superior quality from the Magdalenian period. It is one of the most famous decorated prehistoric caves in Europe still open to the public. The paintings had been emerging on the cave walls during a long period between 11500 and 10500 years BC. From the very beginning of the seventeenth century the cave was of great interest for tourists, who left numerous traces on ...
Founded: 11500 BC | Location: Niaux, France

The famous Dolmen in Bagneux is probably one of the most majestic French dolmens and the largest of the 4,500 dolmens spread out on about 60 French departments.The overall length of this dolmen is over 23 meters (75 feet) and its chamber is over 18 meters (60 feet) long. As all dolmens, the 'Great Covered stone" in Bagneux, was a large chamber tomb which must have contained a great number of prehistoric skeletons during t ...
Founded: 4000-2000 BC | Location: Saumur, France

Mane Braz is a Megalithic tomb located 2 km southeast of Erdeven. The site comprises four side chambers and two small dolmens. It is built into a hill and appears to be the remains of a tumulus.
Founded: 5000 - 3000 BC | Location: Erdeven, France

The Caixa de Rotllan (meaning 'Roland"s Tomb' in Catalan language) is a dolmen dating back to the Neolithic period, during the second half of 3rd millennium BC. A legend holds that Roland lived in Vallespir and that, after his death at the Battle of Roncevaux Pass, his horse Veillantif carried Roland"s corpse back to Vallespir and buried him under this dolmen. Dolmens are actually tombs, but they were ...
Founded: 2500 BC | Location: Arles-sur-Tech, France

The Château d'Olhain is probably the most famous castle of the Artois region. It is located in the middle of a lake which reflects its picturesque towers and curtain walls. It was also a major stronghold for the Artois in medieval times and testimony to the power of the Olhain family, first mentioned from the 12th century.

The existence of the castle was known early in the 13th century, but the present construction is largely the work of Jean de Nielles, who married Marie d’Olhain at the end of the 15th century.

The marriage of Alix Nielles to Jean de Berghes, Grand Veneur de France (master of hounds) to the King, meant the castle passed to this family, who kept it for more than 450 years. Once confiscated by Charles Quint, it suffered during the wars that ravaged the Artois. Besieged in 1641 by the French, it was partly demolished by the Spaniards in 1654, and finally blown-up and taken by the Dutch in 1710. Restored in 1830, it was abandoned after 1870, and sold by the last Prince of Berghes in 1900. There is also evidence that one of the castles occupants was related to Charles de Batz-Castelmore d'Artagnan, the person Alexandre Dumas based his Three Musketeers charictor d'Artagnan on.

During the World War I and World War II, the castle was requisitioned first by French troops, then Canadian and British soldiers. The current owner has restored the castle to its former glory.